Video shows huge crowds of people gathered around some temples with balconies; the people wave decorated banners or fans; it seems to be raining as most carry umbrellas. Two elephants walking through the middle of the crowd. Video shows a huge ornate shrine on a float moving towards us through the throngs – this must be the Juggernaut; a closer shot shows the float being pulled along by men.

Guards now prevent frenzied fanatics from throwing themselves under its wheels. The Juggernaut being guided through the crowds.

When the British first observed the Ratha Yatra in the 18th century, they were so amazed that they sent home shocking descriptions which gave rise to the term ‘juggernaut’, meaning “destructive force”. This connotation may have originated from the occasional but accidental death of some devotees under the chariot wheels caused by the crowd and commotion. 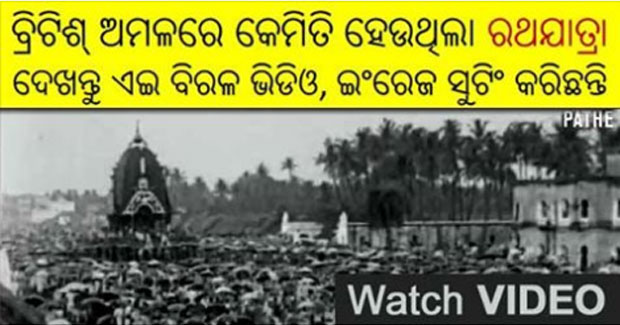