For one of its most expensive campaign exercises, BJP has planned a 3D rally of its prime ministerial candidate, Narendra Modi, in Odisha.

Modi is all set to address virtual public meetings using ‘3D Holographic Projection’ technique in 9 out of the 10 Lok Sabha constituencies, which are going to polls in the first phase on April 10 in Odisha.

Sources say BJP will spend close to Rs 2 crore on the event. The 3D rally, which was decided on at the last minute, will be telecast in 200 cities across the country which go to polls on April 10.

A studio has already been created in the State capital Gandhinagar. Modi would deliver his speeches for virtual rallies from the studio which will be connected with multiple locations through satellite. 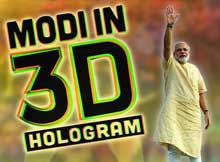 “The rallies would be organised in such a way that people would feel that Modi himself is at the venue and delivering speech to them. Even content for the speech would be tailor-made to the targeted constituency or region,” said BJP spokesperson Sajjan Sharma adding that such rallies would be organized at 30 more places in the coming days.

While addressing party workers through a video-conference on BJP’s Foundation Day on Sunday, Modi asked all booth-level officers to ensure a good turnout on the polling days.