A farmer of Odisha has made an outsized broom of 43-feet-long which has turned out to be the centre of attraction at Pallishree Mela at the ongoing 11-day long world famous Dhanu Jatra in Bargarh.

The young farmer Kulamani of Sargul village under Jharbandha block in the district has made the broom with his three female associates Chandrakanti Paten of the village and Chandrakanti Bag, Sukla Bag of Sakhaduguri village with an intention to showcase the hidden talent of rural Odisha women and to earn a place in Limca Book of World Records and Guinness Book of World Records.

The broom has been designed in 50 days by four skilled broom makers with 117272 twigs. “I had googled a broom of bamboo twigs which was made in 1940 in a foreign country. That kindled a spark and the Swachh Bharat Abhiyan inspired me to work towards it,” Kulamani said.

Their mission started on November 8 and the four used to work three to four hours daily. They collected twigs from nearby villages and jungles. According to Kumalani, his aim was to bigger broom than what he had come across online.

Project Manager of ORMAS, Rajgopal Das informed that special arrangements have been made for displaying the broom and initiatives will be taken to help it enter the Limca Book of World Records. 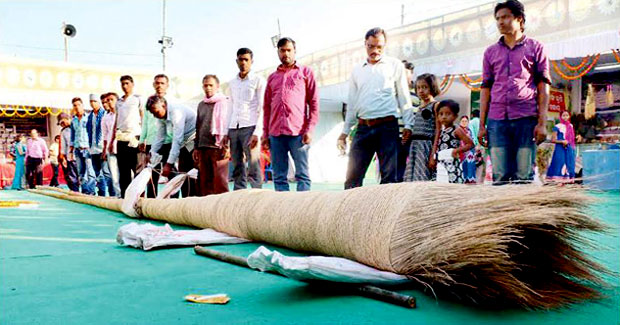