The awards honouring journalists for outstanding work done in 2018 were presented in New Delhi on Monday. President Ram Nath Kovind was the chief guest at the function.

A native of Balangir, Sahu was killed on October 30, 2018, in a Maoist attack at Dantewada’s Aranpur in Chhattisgarh. He was in Dantewada along with colleague reporter Dhiraj Kumar and lighting assistant Mormukut Sharma to cover the Chhattisgarh elections. The team was ambushed while passing the forests of Aranpur.

Sahu and two security men had died on the spot. His body was later brought to his native village Ghusuramunda of Loisingha block in Balangir district for cremation.

Even after having been shot, Achyutanand showed exemplary courage and set new standards in journalism. DD News remembers the supreme sacrifice he made in the line of duty.

On behalf of the martyr, his wife Himanchali Sahu received the coveted award from President Ram Nath Kovind during a function held on January 20 in New Delhi.

READ: Odisha to spend Rs 3,500 crore on development of temples 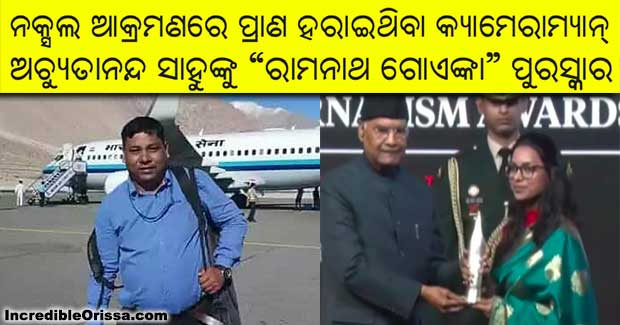