Actress Mahika Sharma alleged that she was harassed by a group of youth at Puri during Ratha Jatra on July 14 while she was going to visit Lord Jagannath.

In an Instagram post, Sharma had shared her ordeal. However, she chose not to file a complaint against the harassers. Police today sought details from the actress in connection with the alleged eve teasing incident.

“We have sent a message on the Instagram to the TV actress asking for her telephone number so that the police would record her statement. We will examine the CCTV footage. Police has taken the matter seriously and action will be taken against the accused if the allegations are found to be true,” Puri SP Sarthak Sarangi said.

She wrote on her Instagram page, ” I really don’t know why that happened. I was really so confused. Like if working is a crime. Talking about ‘sex’ is a crime. We are human being. We all have crush, fantasy and will and wishes. That’s natural. I was facing social media harassment I didn’t say anything. People clicking weird pictures and sharing, asking my rates, gaudy messages. I kept calm. But think today on Rath Yatra I went for morning Aarti and group of people made my fun and one pushed me and was to slap. Still, I kept quiet. No complaints. And I don’t want to. I believe Lord Jagannath will do justice. They are his kid. I’m also his daughter. And I forgive. Because we are one. God bless them. I’m sorry after coming to you. I couldn’t see you, lord. Bless me.”

Now she has deleted the post and created another post. She wrote, “I’m sorry to share my emotions on social media. I’m not really looking for publicity. The incident happened was very small and was in control. Please close the chapter now.” 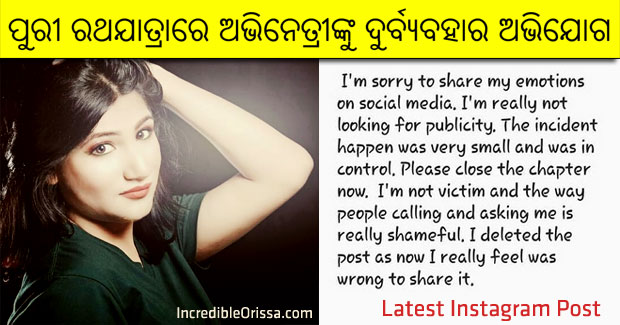