Director and producer of the film Satyabrata Dwivedi, who has directed Odia TV serial ‘Patibrataa’ among others, said the two hour, 20-minutes film is a work of fiction and any resemblance with any individual is mere coincidence.

“The movie highlights the sufferings of people in the aftermath of displacement for projects. The story revolves around a family forced out of their village in the name of development. It has been set in the context contemporary eastern India,” Dwivedi said. 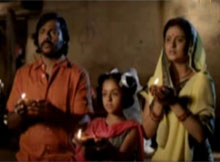 Dwivedi said the movie was shot in various locations of Odisha. Odia actors Manoj Mishra, Lipi, Mangal, Anil Dhir, Sanu Rath and Saumen Pujhari have acted in the film. The hindi film will be ready for release by December.

A modest budget around Rs 2.5 crore has been spent on making the film, he said.