African Empire Circus, one of the few surviving circus companies in the country, has pitched its tents at Exhibition Ground in Bhubaneswar and will stay for about a month.

The circus has African artists who perform death-defying acrobatic stunts, elephants, dogs and Australian birds including macaws, cockatoos and parrots to make the show entertaining.

Watch how four elephants performed some tricks in this African Empire Circus.

African artists who are performing unbelievable stunts in this Empire Circus video.

African Empire Circus is a 55-year-old troupe from Kolkata. The circus company comprises 150 staff from all parts of India. 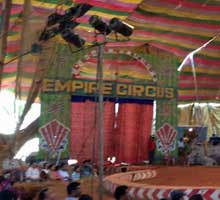