The user trial of Agni-I ballistic missile was conducted by the Strategic Forces Command from the launch pad number 4 at Wheeler island off the coast near Dhamra in Bhadrak district in Odisha at 11.30 pm yesterday night, sources said.

“The test was successful. This was a routine user trial and conducted at night”, test range director MVKV Prasad said.

“They are all weather and all time weapon which can be tested any time as per user’s choice”, Prasad added. 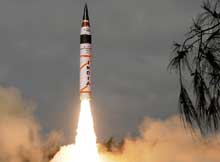 Agni was first tested from the same base Jan 25, 2002. Although several trials of the missile has been conducted since then, night trials of Agni-I was planned to reconfirm its technological parameters.