While 25000 students took the test at 33 centres in Bhubaneswar, the rest appeared at six centres in Berhampur and four centres in Rourkela.

Central Board of Secondary Education (CBSE) has directed students not to get pens for the examination as those will be provided to them at the centre only. Aspirants appearing for the CBSE AIPMT are required to note that the board will display answer key on the website www.aipmt.nic.in prior to declaration of result on June 5.

The board has also directed the candidates not to wear digital watches with calculator as mentioned in the prospectus. 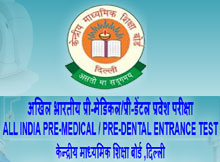 Sources in the CBSE said the results will be announced on or before June 5. Students securing state ranks will have to sign agreement as per the guidelines of the state government at the time of admission.