The inaugural flight UK763 linking Delhi and Bhubaneswar reached at Bhubaneswar Airport at 6.35 on Thursday evening. Official sources said Air Vistara would operate two flights daily from Bhubaneswar to New Delhi and back.

ALSO READ: Sarathi Baba appealed mediapersons to get him out of the Choudwar jail

With Vistara the total number of daily flights at Biju Patnaik International Airport reaches to 20 each in incoming and outgoing routes.

The domestic carrier on Tuesday had a test run from the city to Delhi. The trail run was done by the authorities to scrutinize the runway and to check their preparations in distribution of boarding pass, check-in, luggage transportation etc.

Notably, Vistara’s aircraft has 138 seats – 16 for business class, 36 for premium economy and 96 for economy.

Meanwhile, airport sources said that after Vistara starts operations, there will be eight daily flights to the national capital.

Like GoAir, Vistara will also be offering considerably cheap air fares to passengers. Fares of the tickets are starting from Rs 3020 excluding taxes. And one can buy 2 Business class tickets for the price of 1 now.

More details are provided in the Air Vistara website. You can also call the number 1860-108-9999 for your queries.

“As Bhubaneswar is one of the fastest growing cities in India and its emerging status catering to different segments of travelers, we decided to include Bhubaneswar as a major destination. This is our third destination in east after Guwahati and Bagdogra,” said chief financial officer of Vistara, Niyant Maru. 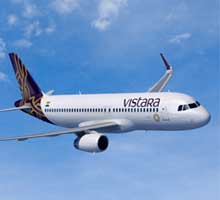 A joint venture of Tata Sons Limited and Singapore International Airlines (SIA), the airline has launched its services from January 2015. After Bhubaneswar, Vistara would start its service from Varanasi from October 21.