The cine star said he was inspired by Naveen Patnaik and his development work in the last 14 years in the state. 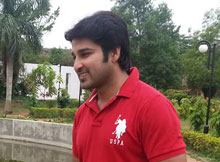 He left the decision on contesting election on the party chief.

Many cine stars including Anubhav Mohanty, Papu Pom Pom, Mihir Das, Satyaki Mishra have already in the Naveen camp, who either contest the election or campaign for the party to attract voters with their star power.