In this interview with Satyajit Mishra, Odia actor Akash Dasnayak talks about ‘why he joined politics’.

Akash cries when questions asked about his father who is a trade unionist and social worker.

Akash is contesting for Korei Assembly seat on a BJD ticket. 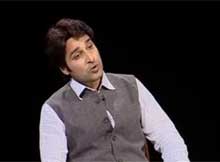 The veteran leader continued to get elected in 10th, 11th, 12th, 13th and the ongoing 14th Assembly from Sukinda.