Odia fans of Akshay Kumar celebrated the release of his film “Robot 2.0” with Rajinikanth, where he portrayed the ornithologist-turned-villain.

While the country is going gaga over the brilliant visual effects in Robot 2.0, Odisha Akkians in Bhubaneswar erected a huge cut-out of the Padman of Bollywood at Maharaja Picture Palace and cut a cake shaped as 2.0 to commemorate his latest film release.

They also sported T-shirts printed with the ‘Pakshiraja’ character of Akshay Kumar. The Gold actor took to Twitter to thank his Odia fans for this gesture and said, “Only you guys matter… Thank you for the love.”

Only you guys matter ❤️ Thank you for the love https://t.co/hE5FEPUndj

Similarly, his followers in Berhampur got together at Rukmini Talkies to celebrate their idol’s latest feature film.

Odisha Akkians are now requesting Odisha Chief Minister Naveen Patnaik on social media to invite Akshay Kumar as a guest to the closing ceremony of the finals of the ongoing Odisha Hockey Men’s World Cup Bhubaneswar 2018.

Watch: Salman Khan at Barabati Stadium in Cuttack of Odisha 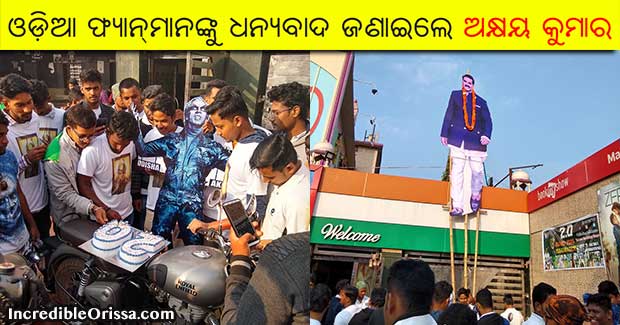