Akshay Kumar fans from Odisha made a beautiful trailer of upcoming Bollywood movie ‘Padman’. The group is known as Odisha Akkians. Khiladi star loved the trailer and tweeted about this.

Thank you so much for all your efforts! Big love to Odisha 🙏🏻 https://t.co/pfK7qnGgXa

“This is the fan-made tribute to Akshay Kumar’s upcoming movie Padman. This tribute is made with lots of love and the support from our Odisha Akkian family,” they’ve wrote on Youtube. Watch the trailer here.

This trailer is directed by Ajit and Sagar. It stars Rakesh, Smrutimayi, Jasmine, Rajat and Deba. This is edited by Sagar.

Pad Man is a biographical comedy-drama film written and directed by R. Balki, featuring Akshay Kumar, Sonam Kapoor and Radhika Apte in lead roles and cameo appearance by Amitabh Bachchan, which is inspired from the life of Arunachalam Muruganantham, a social activist from Tamil Nadu. 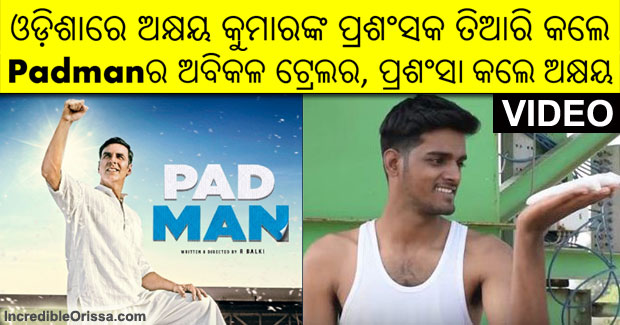