In a very new kind of alliance, the regional outfit Utkal Bharat (UB) headed by Kharavel Swain has decided to fight under the Ama Odisha Party (AOP) banner and symbol in the upcoming 2014 elections.

Both parties have decided to field candidates in all 147 Assembly seats and 21 Lok Sabha seats.

“Ama Odisha and Utkal Bharat will contest under the leadership of Soumya Ranjan Patnaik and one symbol will be used that is the ‘pot’ poll symbol of AOP. One symbol will help during the electioneering process and can be better identified,” said Kharavela Swain, president of Utkal Bharat at a joint press conference with AOP president Soumya Ranjan Patnaik.

Patnaik said the new arrangement will provide a viable alternative to the people of Odisha since both the opposition parties, the Congress and BJP, have failed to put up an effective fight against the corrupt BJD government. 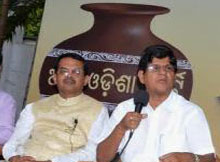 Replying to a media query on the alliance with BJP, UB supremo Kharavela Swain said, “We were ready to have alliance with BJP. But it has betrayed us. First they asked us to wait, but declared their candidates unilaterally without consulting us. The possibility of building a grand alliance is now a thing of the past.”

Both the leaders urged all anti-BJD forces to come together and join hands with them to fight the BJD party, which has failed to put Odisha on the development track despite making tall claims over the last 14 years.