Bollywood megastar Amitabh Bachchan has lent his voice in the documentary (on Nabakalebara) God’s Own People, where he narrates the processes, procedures, rituals, myths and legends associated with Nabakalebara — a symbolic recreation of the wooden deities at Jagannath Temple, Puri.

Directed by Odisha born National Award winning-filmmaker Nila Madhab Panda, the documentary has Bachchan’s voiceover in English, while the locals in the background can be heard speaking in Odia.

Tourism and culture minister of the state, Ashok Chandra Panda confirmed on Bachchan lending his voice for the English version of the docu.

“There are discussions on using his voice for the Hindi version too. The film is currently doing the festival rounds across the globe. We are planning to release it in theatres too,” said Panda.

An endeavour taken by the tourism department of government of Odisha, the documentary has been scripted by Shankhajeet De, while Indraneel Lahiri is the DOP and Puloma Pal has edited it.

It is noteworthy, that recently God’s Own People, directed by Padma Shri Nila Madhab Panda was screened at the prestigious Cannes Film Festival in France. 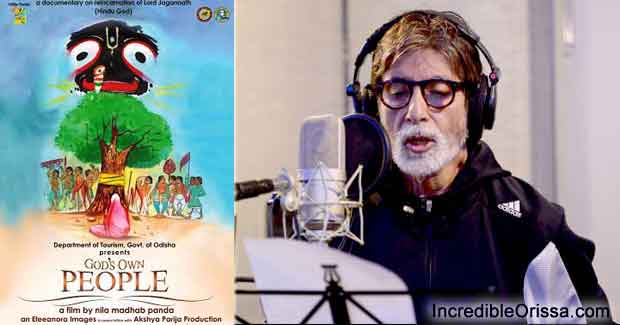