This song Jhatka Laga Re is picturised on all 5 villains of OMM, Sudhakar and Amlan.

Vighnaz Rockband has composed this track and Bibhu Kishore lent his voice in it. 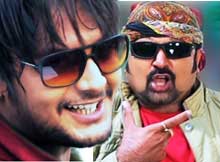