It is a truly well-deserved victory as Ananya enthralled judges and audiences alike with her clear and melodious voice. Not surprisingly, Ananya had won the title of Best performer on Saturday too!

Her journey in the show has been nothing but extraordinary. Ananya has grown strength to strength with every performance and has shown remarkable versatility as a singer.

The grand finale took place amidst much fanfare on Sunday and Kapil Sharma joined the entire gang to add to the masti. The comedian actor turned up on the sets to promote his upcoming film Kis Kisko Pyaar Karoon.

All the three girls performed their best on the gala night of Indian Idol Junior 2. After Vaishnav Girish’s exit from the show it was a tough competition between the three girls. Ananya Nanda battled it out with the other two and emerged as the winner of the show!

Having said this, the other two finalists: Nahid Afrin and Nithyashree Venkataramanan too are super talented and dedicated. It was indeed awesome to watch them belt out super melodious songs episode after episode, captivating audiences’ attention all the while!

Tonight along with Sonakshi Sinha and Vishal Dadlani, Kapil Sharma joined the finale round. unfortunately Salim had to miss the show for some reason.

Ananya Sritam Nanda received a cash prize of Rs 10 lakh from Sony Entertainment Television and a host of other prizes from sponsors of the show. 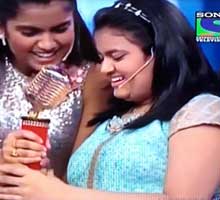 After 15 weeks of grueling auditions, gala rounds and some mind blowing performances by 13 contestants, the show will come to an end as India will get its ‘Second Indian Idol Junior’.

Hailing from a small village of Puri in Odisha, Ananya Sritam Nanda has sure made her parents very proud of her big win. We wish her all the best for her journey as a professional singer in the film industry!