Odia boy Anshuman Rath is the captain of Hong Kong cricket team in Asia cup 2018. He is fondly called as Anshy – a wicketkeeper/batsman, who can also bowl slow left-arm orthodox.

“As an Indian living in Hong Kong, I’m proud that I’m playing cricket at the international level. After all, it’s the sport most people in my home country are in love with,” said Rath.

Pakistan dismissed Hong Kong for a paltry 116 in a Group A match of the Asia Cup on Sunday. Kinchit Shah (26) and Aizaz Khan (27) were the main scorers for Hong Kong, while skipper and player of Odisha origin Anshuman Rath (19) did defy the opposition bowlers for some time.

Anshuman’s parents had shifted to Hong Kong in the late nineties for business purpose. They hail from Satyanagar in Bhubaneswar. He was born and brought up there. However, the family keeps visiting Odisha frequently and Anshuman not only converses fluently in Odia, but also loves to visit his hometown Bhubaneswar.

“I got hooked to the game when I watched India reach the final of the ICC World Cup in 2003. I was only six. My father and I started playing cricket at home. After breaking enough furniture, he decided to enrol me at the Hong Kong Cricket Club for coaching,” he said. 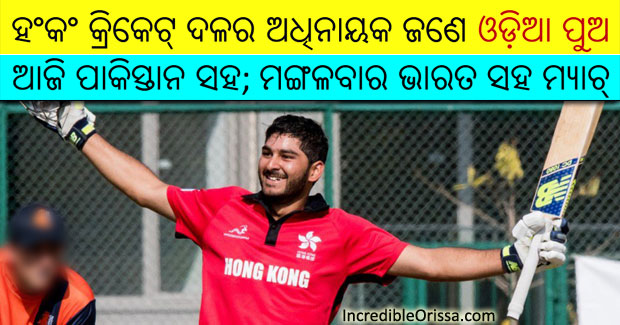