This song is written by Srikant Dash and singers are Manas & Kulu. 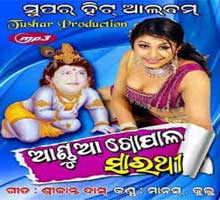