Bijay Malla, member of the Odisha Censor Board also took part in this discussion.

The host asked many questions about the recently released movie to three of them. Anubhav said that the success of the film goes to whole team.

What they have told, watch in the video below. 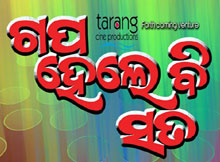 Prem Anand revealed that the popular ‘Tate Gaidele Tu Gita Heijau’ song was recorded at last, when Anubhav discarded another song which was recorded for the same situation earlier.