In a recent interview to Kanak TV, Odia actress Aparajita Mohanty cleared everyone’s doubt about her visit to Sarathi Baba ashram and a photo with Satyam which is viral on social media now-a-days.

She denied the story about this pic and told this boy might have manipulated her picture technically.

Editor Manoranjan Mishra asked her many questions about defeat in 2014 election, now she supports which party and what is her equation with Congress party leaders. 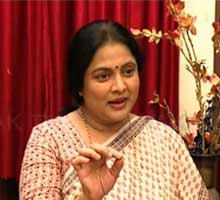 Sources revealed that Santosh Raul alias Srimad Sarathi Dev was all set to venture into broadcasting business in Odisha.

His adopted son Satyam Sekhar Roul was looking after the production house as well as preparing the blueprint for launching their television channel.