Arabinda Muduli Foundation has been set up in the memory of renowned Bhajan singer Arabinda Muduli. The objective is to preserve his innumerable and invaluable musical legacy.

Born in an Ordinary but culturally extraordinary family in the village ‘Khanati’ of Khordha district, Arabinda Muduli could rise to the pinnacle of success as a singer par-excellence in the field of devotional music. He was born with a gifted voice and his devotion to music, commitment to practice and passion to stir the soul of his listeners made him stand grand over the span of more than three decades.

Arabinda Muduli has won the hearts of the billions of music lovers in India and abroad with his inimitable renderings of Odia bhajans. Holding Lord Jagannath dear to his heart, he gave new dimensions to the entity of ‘Bhakti Sangeet’.

Delhi-based journalist and chairman of the foundation Kishore Dwivedi, USA-based philanthropist and scientist Dr SK Dash, social activist Arundhati Devi and two sons of Muduli, among others, were present.

ALSO READ: Sikkim Govt launches ‘One Family, One Job’ scheme, When in Odisha 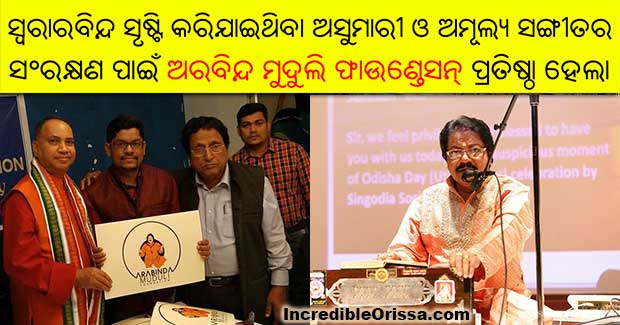