Sahu has been suspended from the party for questioning the state leadership over the reasons for the lack of steam in the Modi wave in the Kandhamal by-election.

He urged the state leadership to revoke the suspension order on him as he has not indulged in any anti-party activities. 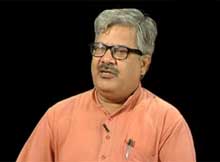 Sources said the leadership would take a final call on Sahu’s future after he replies to the show-cause notice served on him.

Ashok Sahu said: “I am preparing a detailed explanatory note to be submitted to the leadership.”