Smart city Bhubaneswar has added another feather to its cap as it has been ranked 4th in the best quality of governance in cities, a study done by the Annual Survey of India’s City-Systems (ASICS)-2017.

It is to be noted that major cities like Delhi, Mumbai, Ahmedabad, Benguluru, Hyderabad, etc. are ranked lower in the Table. Among the Medium cities category (up to 1 million population), Bhubaneswar is at the top along with Thiruvanantapuram.

ASICS does not measure quality of infrastructure and services such as roads and traffic, garbage, water, housing, sanitation and air pollution, but instead measures the preparedness of cities to deliver high quality infrastructure and services in the long-term by evaluating “city-systems” of spatial planning and design standards, municipal finance, municipal staffing, political leadership at the city level and transparency and citizen participation. 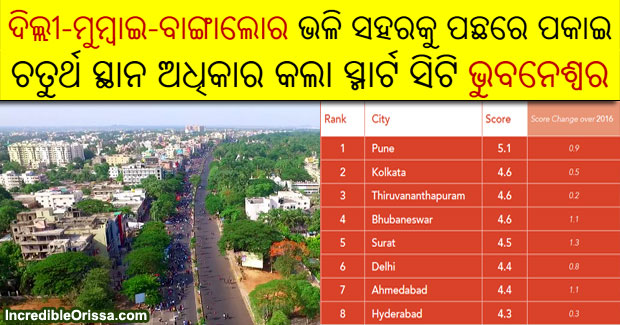