The veteran stage artist who was suffering from lungs infection had also developed cardiac problems last evening and had recorded a drop in his blood pressure, according to hospital sources.

The ailing artist who was shifted to the Intensive Care Unit (ICU) of the Capital Hospital here after his health condition worsened last evening breathed his last at about 5.25 PM today.

A pall of gloom descended among his fans as news broke out about his death. Many theatre personalities including directors, playwrights, artists, writers gathered at the Capital Hospital premises to pay their last respects to their Asim Da.

Asim Basu, a prominent personality in the art fraternity – both fine art and theatre has contributed immensely to Odisha’s cultural scene. He started as a book cover designer when the Odia literary world was immensely active. His art-direction in films like Agni Sanketa (Odia) and Shodh (Hindi) are introduction enough for him.

The octogenarian had also excelled in the fields of painting and sculpture and of course set designing, dominating the stage designing scene in Odisha’s theatre since many decades. He had performed in films like Jaga Balia, Dadagiri and many others. He had also directed few plays.

Born in a small village in north Balasore, Basu had left home to learn painting in Kolkata. The recipient of the state Sangeet Natak Akademi Award is survived by his son and daughters Atasi, a painter and Bhaswati, an actress.

ALSO READ: Odisha to have a underground crude oil reserve at Chandikhol 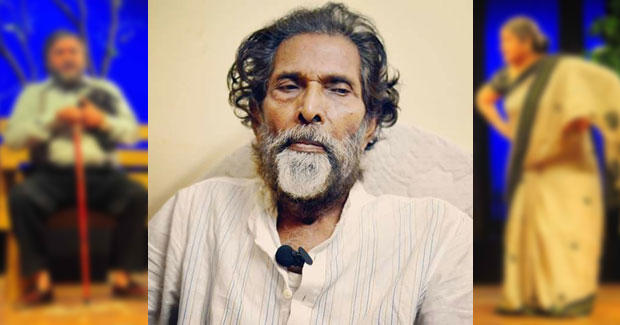