Industry sources said that the bride, Trupti, is a city girl and is an alumnus of a city-based management college, resident of Satya Nagar and only daughter of businessman Lalit Satpathy. Babushan and Trupti had studied together at the DAV Public School, Unit VIII.

“They have been going around for the past five years,” said a friend of Babushan.

At the hotel, apart from family members and close relatives of the two families, very few people from the film industry were present.

Some other sources said that Babushan and Trupti got married in the court of SDJM Bhubaneswar on 4th July (Friday). Marriage register shows the age of both as 23. It is done very privately and out of media reach.

Babushan, the only son of matinee superstar Uttam Mohanty and actress Aparajita Mohanty, has many several hit Odia films to his kitty. 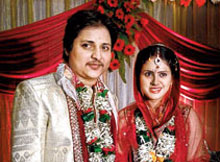 “On November 23, reception will be held at Bhubaneswar and the media will be invited to the reception. Kindly, be patient. The picture will be uploaded on a social networking site soon,” said a family member when scribes waiting outside the hotel approached them for visuals of the ceremony.

47 Comments
Improve your male potency and fight back the premature ejaculation. With the help of tadalis-reviews.com you will have your healthy sexual life back in no time. Order it with Priligy online and forget about premature ejaculation once and for all.
Copyright © 2022 Incredible Orissa.
error: Content is protected !!