The return journey of the chariots is known as Bahuda Yatra. In 2022, Bahuda falls on July 9 (Saturday).

After a stay of eight days in the Gundicha temple, the three holy chariots of Lord Jagannath, Lord Balabhadra and Devi Subhadra return to its abode in Puri temple.

This is the day when the chariots make their way out of the ‘Adapa Mandapa’ in Gundicha temple. Whilst their way back home, the chariots stop for a while at the Mausima Temple where they are offered Odisha’s popular dish ‘poda pitha’- made of rice, jaggery, coconuts, lentils.

Senior servitor and assistant secretary of Daitapati Nijog Binayak Dasmohapatra said: the rituals of the deities for the Bahuda Yatra would be begin with Mangala Alati at 4 AM followed by Mailam at 4.15 AM, Tadapa Lagi and Rosha Homa at 4.30 AM, Abakasha at 5 AM, Surya Puja at 5.15 AM, Dwarapala Puja and Besha Sesha at 5.30 AM, Gopala Ballava and Sakala Dhupa (Khichudi Bhoga) between 5.30 AM and 6.30 AM, Senapata Lagi between 6.30 AM and 11.30 AM and Mangalarpana at 11.45 AM.

“The pahandi (procession) of the deities would be held between 12 PM and 2.30 PM while the Gajapati King Divyasingh Deb will perform Chhera Panhara on the three chariots at 3.30 PM. After the Chhera Panhara, the servitors will conduct the Charamala Phita (untying of ropes) from the three chariots and fix the wooden horses and charioteers (Sarathi). The pulling of chariots will begin at 4 PM,” he added.

Rath Yatra is one of the most sought-after and popular religious events in Odisha. Every year, lakhs of people flock to the holy city of Puri to seek blessings of the Lord. Jai Jagannath! 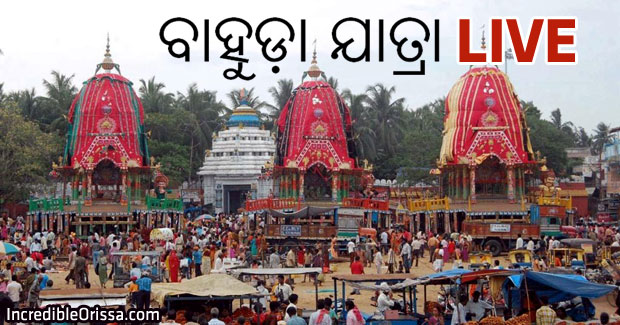