We know that Balunga Toka song and movie has given superstardom to Anubhav Mohanty in Ollywood.

Now director Sudhakar Vasanth has included another ‘Balunga’ song in his first production “OMM” which was released recently. 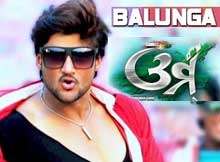 After super success of ‘Balunga Toka’, director Sudhakar Vasanth and Anubhav have worked in many films together.

So director wants to recreate that type of hysteria among audience by this song.