Berhampur city becomes the first Municipal Corporation in Odisha to have a smart underground dustbin system. Chief Minister Naveen Patnaik will inaugurate it on Saturday.

Launching a first of its kind initiative to fulfil Mahatma Gandhi’s dream of a clean India, the Berhampur Municipal Corporation (BeMC) placed semi-underground dustbins on the roadside to store wet and dry garbage.

in a smart move, the Berhampur Municipal Corporation has installed as many as 17 smart underground dustbins near Binayak Acharya College, guest house, Durga Devi temple and circuit house at an estimated cost of Rs 5 crore.

The civic body would collect garbage from various places of the city and dump them into these dustbins. The dustbins of 5 ft length and 5 ft width are made of steel.

Sensors have been fitted to these bins. “We can see the dashboards through sensors. If the garbage dumped is less than 40 per cent of garbage, it will show green. On nearing 70 per cent, it will turn yellow. The sensor will ping once the dump touch 80 per cent and vehicles will sent to remove them,” Commissioner Chakrabati Singh Rathore said. 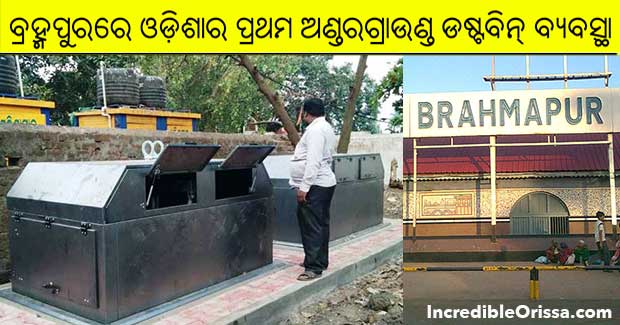