Bhajan Samrat Bhikari Bala is Odisha’s most popular devotional singer till now. He was born on 25th May 1929 at village Sobala of Pattamundei block under Kendrapara district in Odisha.

Bhikari Bala became an A-grade singer in All India Radio, Cuttack in 1963 after he received rave reviews for his first broadcast song Prana mitani bare chahan re. But his popularity grew with Kotha bhoga khia, Sathie pauti bhogaru tumara and other such bhajans in the early 70s. His lucid and moving rendition of bhajans written by old generation poets are still popular today. Best odia bhajans of Bhikari Bala listen here.

Bhikari Bala’s Jagannath bhajans and Gita Govinda recitals made him a household name. He had also sung Champu, Chhanda, Folk songs and Odia film songs. He was awarded the title of Bhajan Samrat by the Puri Gajapati and was given special privileges inside the temple for his devotional tribute to Lord Jagannath. He was also taken to be one of the servitors of the temple for having offered the Chamara Seba to Lord Jagannath.

Bhikari Bala was bed-ridden for about a year due to age related ailments and had been admitted to SCB Medical College and Hospital in Cuttack. After the public outrage, the Government of Odisha offered financial assistance to the legend and urged the state health department to take care of his health.

On 2nd November 2010, he died at the SCB Medical College and Hospital in Cuttack, Odisha at around 11:20 pm. Later, he was consigned to flames at the Swargadwara at Puri. A guard of honour by according gun salute was presented at the crematorium while the Sri Jagannath Temple administration presented a sacred piece of cloth (Khandua) which covered his body. 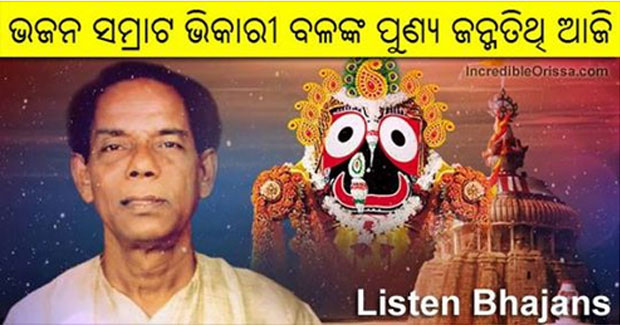