A three-month ban from May 1 to July 31 on the entry of tourists and visitors to the Bhitarkanika National Park in Odisha was imposed as the crocodile nesting season was underway.

Crocodiles mate between February and April and nesting takes place in May. A female crocodile, on an average, lays about 45 eggs. 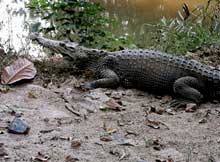 Hatchlings emerge from the eggs after 70-80 days. The mother crocodile actively guards the nest, usually prepared with mangrove twigs, leaves and mud.