ABC Airways will start Bhubaneswar to Bangalore direct flight operations from this June.

The Bangalore-based aviation company will run one flight in the evening between Bhubaneswar and Bangalore.

“The airline has agreed to charge less than Rs 5,000 per passenger for flying to Bangalore. We have discussed all the modalities including parking fee of aircraft, providing offices and check-in counters, with the private airlines,” said Biju Patnaik Airport director Sharad Kumar.

For Bangalore operations, sources said, the flier recently procured an Embraer e-Jet flight, a sophisticated aircraft with 78 seats. “We decided to run the flight from here as we are exploring flying potential in tier-II cities like Bhubaneswar,” said managing director of the airline Rajesh Ibrahim. 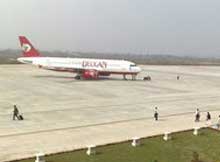 “We will plan the flight schedule in such a way that people can leave Bangalore in the morning, finish their work in Bhubaneswar during the day and get back home in the evening,” he added.

The ABC’s flight has 2/2 seating system. It has 12 seats for business class and 66 for economy class.