Good news for air passengers as Air India is all set to resume international flight to Bangkok from Biju Patnaik International Airport in Bhubaneswar from December 1.

The flight service to Bengaluru from Bhubaneswar that was suspended earlier by Air India will also restart from the same day. Following decision by the Air India authorities, the ticket booking on these two routes has already begun.

Earlier, Air India had temporarily suspended its direct flight service from Bhubaneswar to Bangkok from July 16 till September 30 due to ‘operational reasons’.

Expressing concern over the cancellation of AI flight, Chief Minister Naveen Patnaik in a letter to Union Civil Aviation Minister Suresh Prabhu, on July 20, had said “It was expected that the Air India would subsequently expand its operations to other destinations like Singapore, Indonesia and Sri Lanka. But the abrupt suspension of the existing operations has dealt a severe jolt to the aviation and tourism sector in the state. This apart, the withdrawal of the domestic flight between Bengaluru and Bhubaneswar has come as a setback for IT industry in the state.”

India’s national carrier had started its maiden Bhubaneswar-Bangkok flight on December 10, 2017. Chief Minister Naveen Patnaik had flagged off the first flight operation at the city airport.

The flight was operating on every Thursday, Saturday and Sunday in a week. Commercial airport near Dhamra port in Odisha’s Bhadrak district 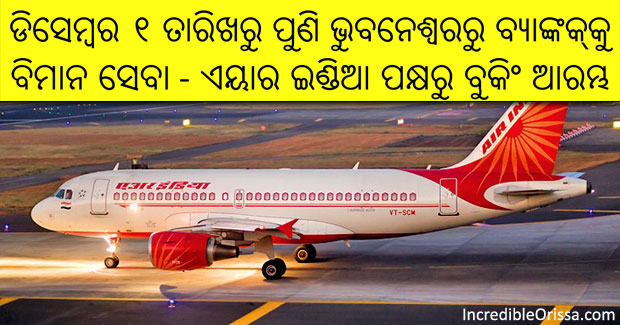