The protestors alleged the film had mocked at Hindu deities and hurt sentiments.

The enraged protestors shouted slogans, broke the glass counters, pulled down the posters, and tore off before setting them afire at cinema halls.

“The movie insults the Hindu gods and goddesses. It hurts the religious sentiments and sanatan dharma. The movie has been funded by Dubai and Pakistan. Besides, the movie has been premiered in Dubai,” an activist alleged.

Similar incidents were reported from Shriya-Swati-Stutee complex under Kharavel Nagar police station limits. As soon as the protest escalated, police reached the spot to control the situation.

The Raju Hirani-directed PK had received a great response at the box-office with the film revenue exceeding over Rs 200 crore across the country in the first week of its release. 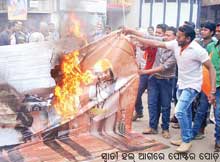