Odisha capital Bhubaneswar ranked 18th in the country, according to the ranking of 111 cities on the Ease of Living Index released by the Ministry of Housing and Urban Affairs on Monday.

Steel City Rourkela stood at 87th rank. No other cities from the State made it to the list. Pune topped the list, with Navi Mumbai coming in second and Greater Mumbai at third position. However, the national capital Delhi has failed to make it to the top 50, ranking much below cities like Vijayawada and Bhopal at number 65.

The Ease of Living Index is a government initiative to assess cities’ ‘liveability’ with regards to global and national benchmarks and encourage them towards urban planning and management. This is the first-ever exercise undertaken by the ministry to rank the country’s major cities.

In the top-ten, the three cities from Maharashtra were followed by Tirupati, Chandigarh, Thane, Raipur, Indore, Vijayawada and Bhopal. Chennai has been ranked 14th, while Kolkata did not participate in the survey. Kohima (Nagaland) and Patna (Bihar) were also placed in the bottom-three. 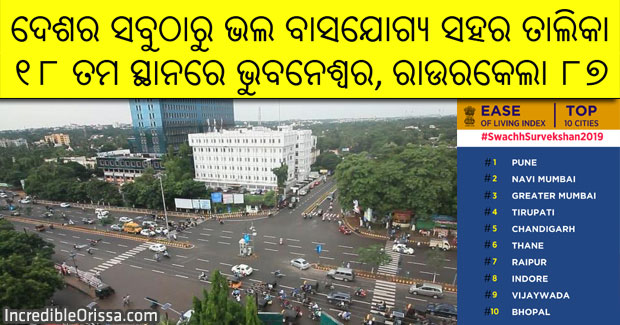