At least 11 people were killed and 32 passengers were injured after a bus fell into a canal in an Andhra Pradesh village early this morning.

The bus heading to Hyderabad from Bhubaneswar hit a bridge divider and plunged through the gap between the two lanes into the canal near Mollapadu. The Volvo bus belonging to Diwakar Travels met with the accident a few minutes after crossing Vijayawada.

Police said nine persons were killed on the spot, two others – one succumbed while being treated at Nandigama government hospital and another when being shifted to a private hospital in Vijayawada. As many as 32 injured passengers were shifted to Nandigama hospital and of them, 22 were referred to various hospitals here as they had suffered fractures and head injuries.

The bus fell down from a 20 feet high bridge on Hyderabad-Vijayawada express highway and struck between the two culverts. The officials extricated the passengers from the ill-fated bus after few hours by using gas cutters.

Most of the passengers are from Visakhapatnam, Bhubaneswar, Srikakulam and Hyderabad. This is the second major incident involving Diwakar Travels agency owned by Telugu Desam Party MP from Anantapur J C Diwakar Reddy. In October 2013, a Diwakar Travels multi-axle Volvo bus taken on lease by Jabbar Travels coming from Bengaluru to Hyderabad caught fire killing 45 passengers at Kothakota in Mahbubnagar district. 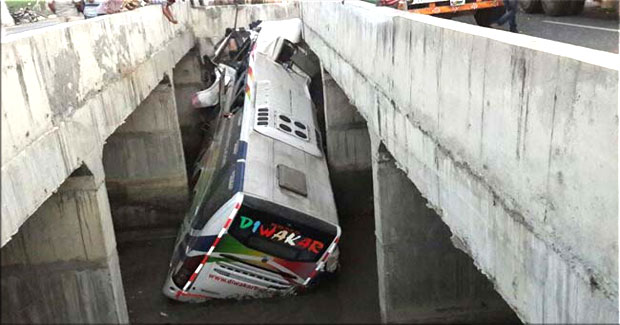