Bhubaneswar has got its first indoor stadium on Monday, which has been built by the East Coast Railway, is the first of its kind facility to be built by a government organisation.

So far, the city had only one sports complex – Kalinga Stadium – for hosting major sporting events.

Officials of the East Coast Railway said that the playing area of 864 square meters (36m x 24m) could be used for three simultaneous badminton matches and two volleyball matches. The stadium can accommodate 1,720 people.

Besides, the stadium could be used for hosting indoor games such as basketball, table tennis and gymnastics. The stadium is equipped with facilities such as dormitories, hostel rooms, conference room, canteen and a gymnasium.

The new stadium will be a big boost to indoor games as the city lacked proper facility to host events such as table tennis and badminton. 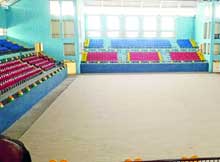 Officials of the East Coast Railway are hopeful that the state government will host indoor sporting events at the stadium.