The opening and closing time of Bhubaneswar parks changed now. Because the Odisha government has issued a circular to all urban local bodies (ULBs) to ensure that parks in their towns and cities be kept open from 6 am to 9 pm.

Also, parks will be kept open on all days of the week and any park staying open beyond 9 pm can continue to do so, stated a circular from the housing and urban development department.

The Bhubaneswar Development Authority (BDA) revised the park opening and closing time in 2017 following demands by the people. It was decided to open the parks from 4 am to 11 am while in the evening they remain open for people from 4 pm to 9 pm.

After the current circular, all the parks under BDA and Bhubaneswar Municipal Corporation (BMC) will have to stick to the new timings.

The decision of opening the parks for people for 15 hours a day is significant because many city parks here have open-air gyms, walking tracks and skating rink.

The move is aimed at helping people destress and keep themselves healthy. The restricted hour prevented many people from coming to the parks after 11 am for exercise. Now, people can come at any time during the day. 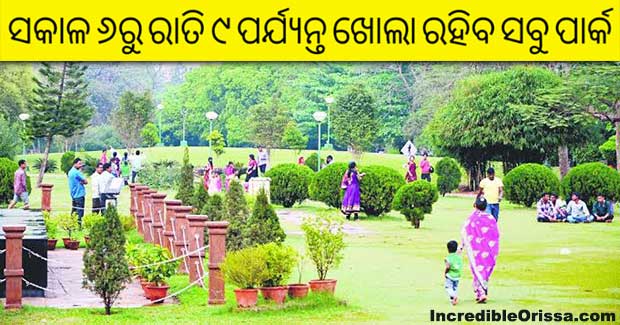