It is aimed to improve Bhubaneswar’s digital presence. The work will mainly take place for the Bhubaneswar smart city project, and the idea is to provide an easy way for visitors and citizens to access information about the culture in Bhubaneswar in a modern way, where the vast majority already is looking for information – on Wikipedia.

QRpedia is a mobile Web-based system which uses QR codes to deliver Wikipedia articles to users, in their preferred language. It is currently in use at museums and other institutions in countries including Australia, Bulgaria, Czech Republic, Estonia, Germany, Spain, the United Kingdom and the United States.

Wikimedia is organising a public writing competition around the city of Bhubaneswar’s culture and history. The goal is to improve and translate important monuments and Temples that BDA hopes to put a QRpedia sign next to, into as many languages as possible.

QRpedia represents a particular use of QR codes within the Wikimedia environment, and there are many commercial and other uses of QR codes that do not involve QRpedia. The basic ideas behind QR codes themselves were invented in 1997 by DENSO WAVE and do not require any licence to use as DENSO WAVE has chosen not to exercise its patent rights. 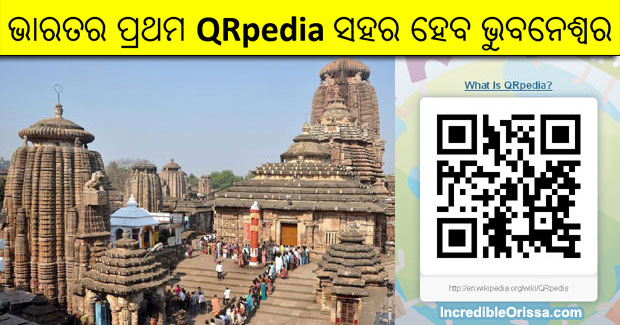