Biju Patnaik International Airport (BPIA) is all set to host the first international scheduled flight which would fly from Bhubaneswar to Dubai on July 10.

The flight schedule for the first ever international flight from the Airport has been finalized. The Dubai bound Air India plane will take off from Bhubaneswar on July 10 at 2 PM.

The Air India plane will operate on a hub and spoke model that will ferry passengers to New Delhi and then to Dubai and vice versa.

Air India will not only use two of its flights to carry international passengers to Delhi but also complete all formalities, including immigration and customs check at the Bhubaeswar airport itself.

Air India AI-873 will leave New Delhi for Bhubaneswar at morning 7:05 AM and land here at 9:05 AM. The plane number will change to AI-077 after leaving Delhi and it will be classified as a hub and spoke place as it will contain both domestic and international passengers.

It will depart from Bhubaneswar at 2 PM and land at the Indira Gandhi International (IGI) Airport at 4:25 PM. The plane number would again change here from AI-874 to AI-078. The Dubai bound passengers will be ferried via New Delhi at 8:30 PM.

The Bhubaneswar bound passengers will be ferried via New Delhi on the return flight. The plane will reach New Delhi at 4:50 AM and leave for Bhubaneswar at 7:05 AM.

The domestic terminal building at BPIA has been modified and rechristened as international terminal (T2) which spans over an area of 6264 sq mt. T2 has a capacity to handle around 400 passengers (200 arriving and 200 departing) during peak travel hours with an annual passenger handling capacity of 0.18 million. 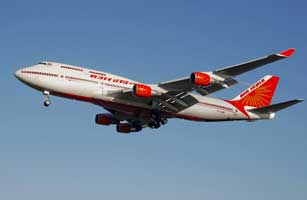 The terminal has been equipped with digitally controlled public address system, six check-in, customs and immigration clearance counters and three conveyor belts for luggage handling. A state-of-the-art flight information display system (FIDS) and CCTV cameras monitoring daily movements have been installed in the building. Besides, parking area of the airport has space to accommodate 300 cars, 45 taxis and six buses at a time. airport sources said.