Odisha born Bikram Mohanty, an occupational therapist and entrepreneur based in Georgia state of US, has emerged as the first Odia to contest American Senate elections.

NRI Bikram Keshari Mohanty from Chandabali area of Bhadrak will face Republican Party candidate Calvin Ellis Black in the polls, to be held on Tuesday.

Last time, he had contested from the same seat in 2012 and had lost to Republican Party’s high profile leader Tim Golden by very few votes.

A man from Odisha who had gone to the USA 20 years ago with just $50 in his pocket to seek a better life for himself and his family is a Democratic Party candidate for Georgia state Senate elections now.

Mohanty (47), son of a retired State Government employee Batakrushna Mohanty, has been living in the city of Valdosta in the US for the last two decades.

As founder and CEO of Innovative Rehab Solutions, he has employed healthcare and rehab professionals from South Georgia without major Government intervention.

After completing his graduation in Bhadrak College, Mohanty had joined National Institute for Orthopaedics at Kolkata in 1988 and later moved to the US in 1994. 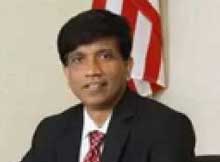 He is the recipient of Clinician of the Year 1997, Nova Care and was appointed to the White House Conference on Aging in 2005 from Georgia as an alternate delegate.

His family members are elated. His brother Biswakeshari Mohanty said it is a proud moment for Odisha as Obama has recognised the State by fielding Bikram as his party candidate.