Saadat Hassan Manto is a Pakistani writer known for his boldness. He was tried six times for obscenity. 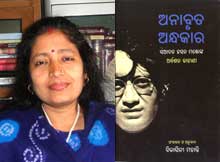