BJB Autonomous College on Thursday announced that it would abstain from the students’ union election process for this year and closed the institution indefinitely in view of violence on its campus on Wednesday.

Elections for the Plus Three students’ union were cancelled earlier in the day in view of the pre-election violence in the college premises on Wednesday.

While two groups of students of the BJB Autonomous College clashed on Wednesday morning, two bombs were hurled, one each at the girls hostel and the boys hostel late in the night leaving a woman boarder injured. She was admitted to the Capital Hospital.

Tension prevailed in the campus yesterday as one group of students kept demanding the holding of students’ union elections saying the decision to cancel elections amounted to abrogation of students’ democratic rights. 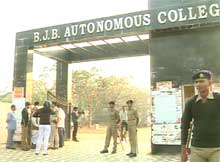 BJB Juior College, which also functions from the same campus, however, has decided to go ahead with the September 29 polls.