Eminent Odia poet Brajanath Ratha passed away at his residence in Balasore on Saturday. He was 79.

The poet, who was ailing since a long time, was a recipient of a series of awards including the Odisha Sahitya Akademi Award, Vishuba Award, and Gokarnika Award.

Born on January 12, 1936, Ratha had carved a niche for himself in the literary world through his powerful and prolific pen.

He was also honoured by global cooperation society international, Seoul, Republic of Korea for contribution to world peace and welfare, cooperation and services.

Ratha was conferred the highest honours from the Orissa Sahitya Academy Award for ‘Manara Manachitra’ He was also awarded the Tagore Literature Award (2010) for his poetry collection ‘Samanya Asamanya’. 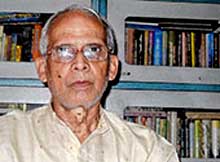 Brajanath Rath is survived by his wife Pushpalata Devi and three sons.