Every year, Aswini Mishra, an engineer from Odisha’s Jharsuguda district develops the brake system that is installed in the three majestic chariots of the divine Trinity for Rath Yatra in Puri.

He plays a crucial role in ensuring a accident-free Rath Yatra in Puri. Mishra decided to come up with the ‘brake system’ when he read about accidental death of a devotee under the wheels of one of the chariots in mid-2000.

A decade back, he approached the Sri Jagannath Temple Administration (SJTA) to come up with the ‘brake system.’ He presented his brake model before the SJTA, which gave its approval.

Mishra roped in three of his workers – Prashanta Benia, Trilochan Badhai and Dhaniram Bagh – and together, they constructed the brakes that were installed in the chariots the same year. This brake system continues to be in use. Aswini Mishra works at MCL’s Lajkura Open Cast Project at Brajrajnagar.

He said the brake is made from three pieces of Sal wood which are fitted with thick nylon rubber belt using specially designed iron nails. The wooden log is then fitted with a chain and pulley that form the integral part of the brakes.

When the chariots are required to be stopped, the Bhoi sevayats of the Puri temple, who stand atop the structures, drop the wooden logs from the chariots using the chain and pulley. The wood falls in front of the wheel and it gets jammed with the nylon rubber acting as brake shoes very similar to vehicles. 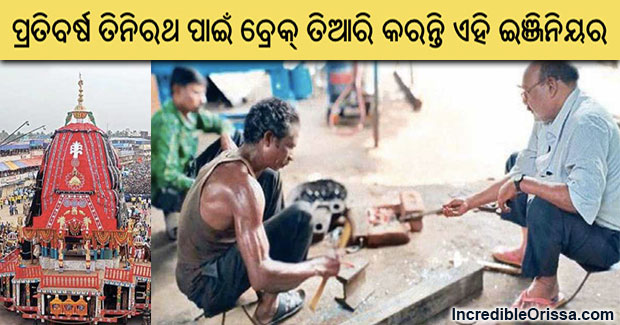