The Odisha Chief Minister Naveen Patnaik announced that the “Biju Swasthya Kalyan Yojana” will be launched on August 15 and will provide cashless treatment to around 3.5 crore people from over 70 lakh families in the state.

Under the programme, a family will get up to Rs 5 lakh per annum to meet healthcare expenditure at all government-run hospitals. The government will also provide Rs 500 to meet pick up and drop expense of pregnant women and infant admitted to government hospitals.

“One of our major commitments is universal health coverage. Today I am happy to announce that each and everyone visiting any Government health institution from the district to sub-centre level would be provided all health services free of cost,” Patnaik said.

“Biju Swasthya Kalyan Yojana would be implemented in the State from August 15. Under the scheme, secondary and tertiary cashless healthcare assistance would be provided up to Rs 5 lakh per family per annum. About 3.5 crore people of the State covering more than 70 lakh families would be benefited by the landmark initiative,” said the Chief Minister.

The chief minister said the user fees now being collected from patients in government hospitals, would be stopped after implementation of the scheme from August 15. 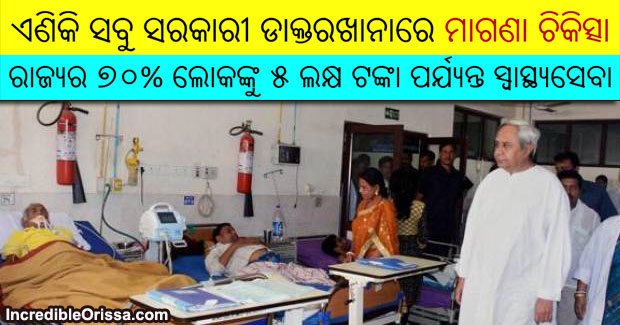