The arrest of Odisha’s top shot music video choreographer Lubun Sen may have thrown the lid off the best kept secret of the Odia Film, Album and TV industry – the existence of ‘casting couch’. But just about everyone runs for cover when asked to comment on the phenomenon.

The Oriya entertainment industry is obviously in a state of panic after this incident. But there are some who are willing to speak on the issue on condition of anonymity.

“The casting couch is not only limited to album business. It is also thriving in the movie world. Even established actresses are made to go through this ordeal to get more work,” said a senior actress.

“Casting couch probably exists. There are some who are crazy to become stars overnight. They do everything for their career without understanding the meaning of a career. As a result, they vanish as soon as they arrive. For this generation, good is not good enough and bad is not too bad,” another veteran actress of Ollywood industry said.

“They first approve me for projects but finally reject me because I don’t agree to ‘commit’. This is the term used in the industry for sexual favours,” a newcomer heroine disclosed. 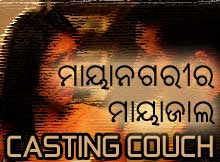