In its most high-profile arrest in the multi-hundred crore chit fund scam yet, the Central Bureau of Investigation (CBI) on Monday held former Advocate General of Odisha, Ashok Mohanty for allegedly getting the Rs 1 crore property at Cuttack’s Bidanasi as a gift from Artha Tatwa (AT) Group chief Pradeep Sethi.

After several rounds of questioning by the special investigating unit formed by the CBI, Mohanty was picked up from his residence in Cuttack and informed that he had been placed under arrest.

The special chief judicial magistrate court allowed the CBI to take Mohanty on a two-day remand. The court verdict came after the judge heard arguments from both sides on the CBI’s remand plea.

Ashok Mohanty was interrogated by the CBI on September 13, a day after he resigned from the advocate general’s post and had denied allegations that he got a house in Cuttack free of cost from Pradip Sethy.

Following his arrest, Mohanty said that he had a clear conscience over the matter and he has not done anything wrong. Mohanty also said that while buying the house, he was unaware of the fact that Pradip Sethy is the owner of AT Group. “Truth will come out”, said Mohanty to media persons. 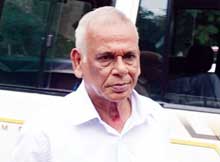