The high point of the surveillance system is that it can alert the control room on several ‘critical’ aspects like unlawful assembly of people in high-security areas and presence of abandoned objects at a particular place for more than five minutes. Soon after reading the alerts, the control room operators can alert the police stations concerned for action.

In the first phase of the project, a total of 114 CCTV cameras has been installed at about 28 strategic locations in the city including major junction like AG crossing, Master Canteen square, Rajmahal crossing, lower PMG, Kalinga hospital square, Airport crossing, Governor house, Naveen Niwas and near Rabindra Mandap.

In the second phase, 40 more cameras will be put up at different areas of the city while another 22 will be installed in the third phase, they added.

Commissionerate police handed over the project to Odisha State Police Housing Cooperation (OSPHC) which in turn commissioned a private party to execute the project, which would cost Rs 23 crore. 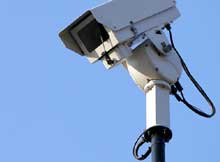 Before CCTV surveillance system has been installed at Bhubaneswar railway station and 32 cameras put at vantage points.